Conservatives To Mitch McConnell: Do Your Job or No Vacation

It started innocuously enough with a comment from Marc Short, the White House legislative affairs director, who said during an event on Capitol Hill with conservative leaders: “If we reach August and [they] still have not completed appropriations work or not confirmed our nominees, then of course we would like to see Congress stay in and do its work,” Short said. 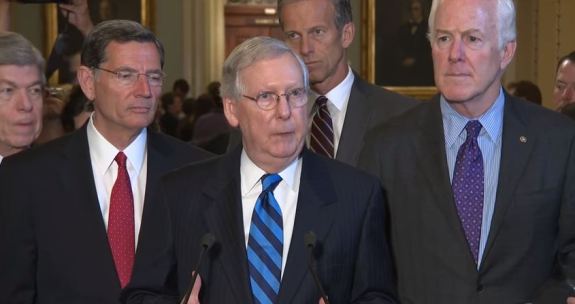 President Trump later challenged Congress to get a funding deal done before they recess in August or “not go home.”

“The Senate should get funding done before the August break, or NOT GO HOME,” Trump tweeted. “Wall and Border Security should be included. Also waiting for approval of almost 300 nominations, worst in history. Democrats are doing everything possible to obstruct, all they know how to do. STAY!”

President Trump and Short put the onus on Democrats to move the process along, but others have been more direct in putting it where it belongs; on the Senate’s Republican Majority Leader Mitch McConnell.

In conjunction with the event where Marc Short spoke, leaders of the Conservative Action Project distributed an April 27 memo to Congress suggesting August recess be pushed back “until sufficient progress has been made confirming the president’s nominees.”

The memo also suggests the break should be truncated up until, “government funding legislation has been openly debated in the House and Senate with a full opportunity for votes on amendments, and is approved by both houses and sent to the president.”

Short said the Trump administration hoped work would get done in a timely fashion on both the spending and confirmation front, and his primary purpose in being at the conservative event was to back the efforts of the conservative groups and Senator David Perdue to highlight the issue.

However, not everyone in the room was prepared to join Marc Short and the President in blaming the Democrats.

According to Roll Call’s Niels Lesniewski, Senator Perdue said that he anticipated another letter this week from a group of Senate Republicans to Majority Leader Mitch McConnell, R-Ky., expressing support for weekend sessions and delaying recesses, including the one in August, to pressure Democrats to move ahead on more nominations.

The group of seven GOP senators on Tuesday called on McConnell to keep the Senate open as Republicans push for the upper chamber to take up the 12 appropriations bills ahead of the August recess despite only having 52 working days, excluding Fridays, to get the work done. They also called on the Senate to work weekends and throughout the night to get these nominees through.